The future is already here — it's just not very evenly distributed 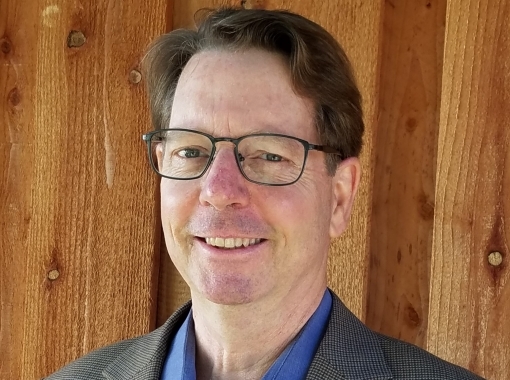 Our Board of Advisors helps substantially to shape the conference and to future proof the discussions there. One of these important influencers is Alan Morrison, which we are proud to have as a regular at the conference since 2018. Today Danilo de Oliveira Pereira got him, to answer on the past, present, and future of Semantic AI.

Danilo: What are the major trends and upcoming developments in Semantic AI?

Alan: John Launchbury of the US Defense Advanced Research Projects Agency (DARPA) identified three waves of AI back in 2017, in a video that's well worth watching.

Knowledge representation (dominant during the First Wave of AI) tech helps create context (for the Third Wave that's just getting started) through knowledge graphs. Those are semantic webs of context that consist of what you could call "smart data', which equals the instance data you have plus description or predicate logic that describes and disambiguates that data in the form of Tinker Toy-style graphs. In legacy computing, much of that essential logic is trapped in application code. If you bring the description into the mix at the data layer through the knowledge graph, all of a sudden, you have machine readable context that can be scaled, or "generalized." That context can be the knowledge base for statistical machine learning efforts and can provide a means of reasoning that neural network approaches, for example, lack. 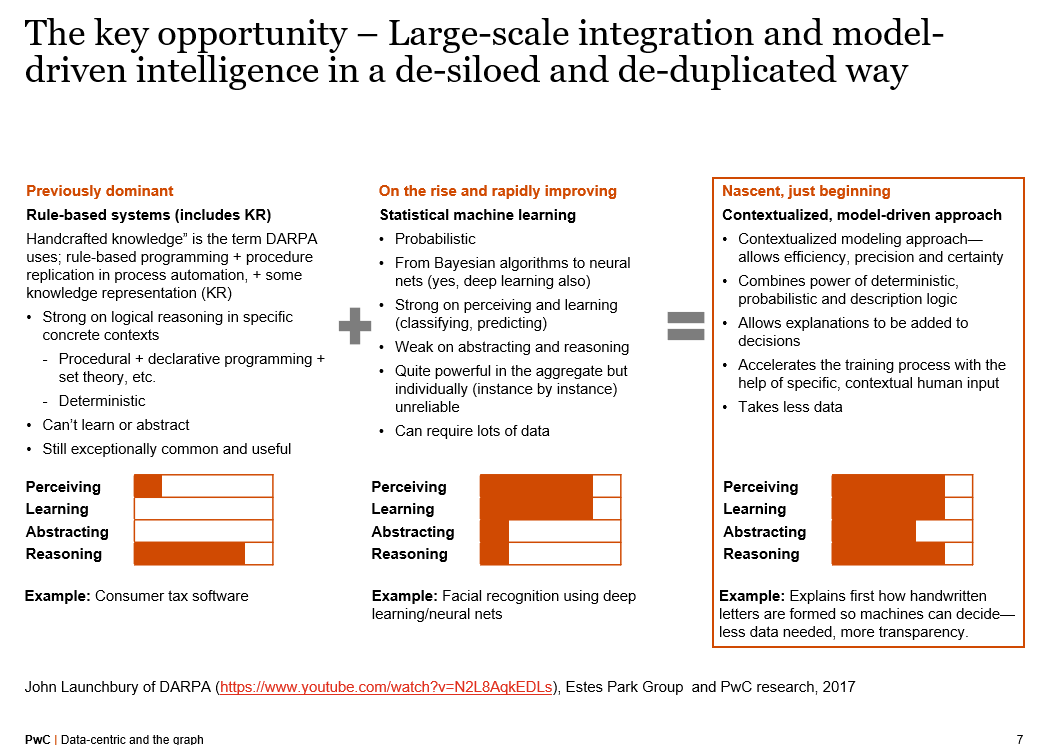 At its most elemental level, such a web of context describes piece by piece how one entity is related to another, such as Ian knows Mary. What's most important here that the Second Wave of AI (the wave of statistical machine learning, including deep learning) has been missing, is the verb in that sentence that describes the relationship between Ian and Mary.

Humans can help machines describe and understand the essential, important relationships between people, places, things, and ideas, and those are represented as interconnected collections of these subjects, verbs, and objects.

Ultimately, those collections of subjects, verbs, and objects or entities and—very importantly, the relationships between them—can constitute a lingua franca between humans and machines, a way to distill and share actionable understanding via knowledge graphs. 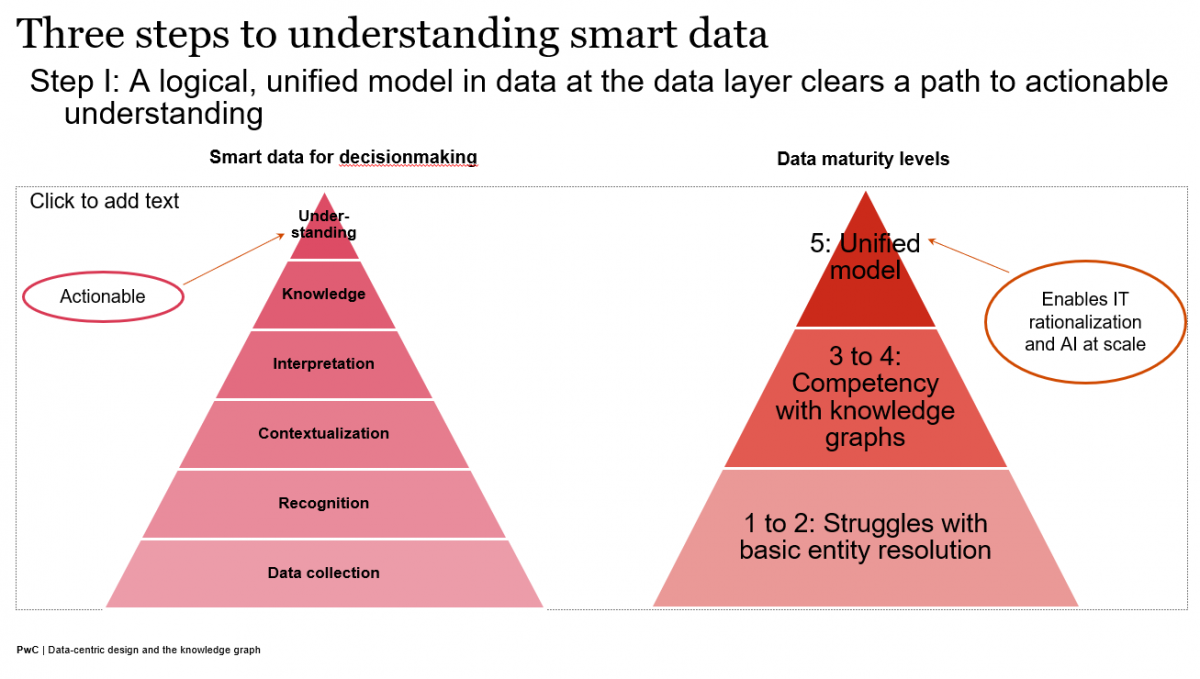 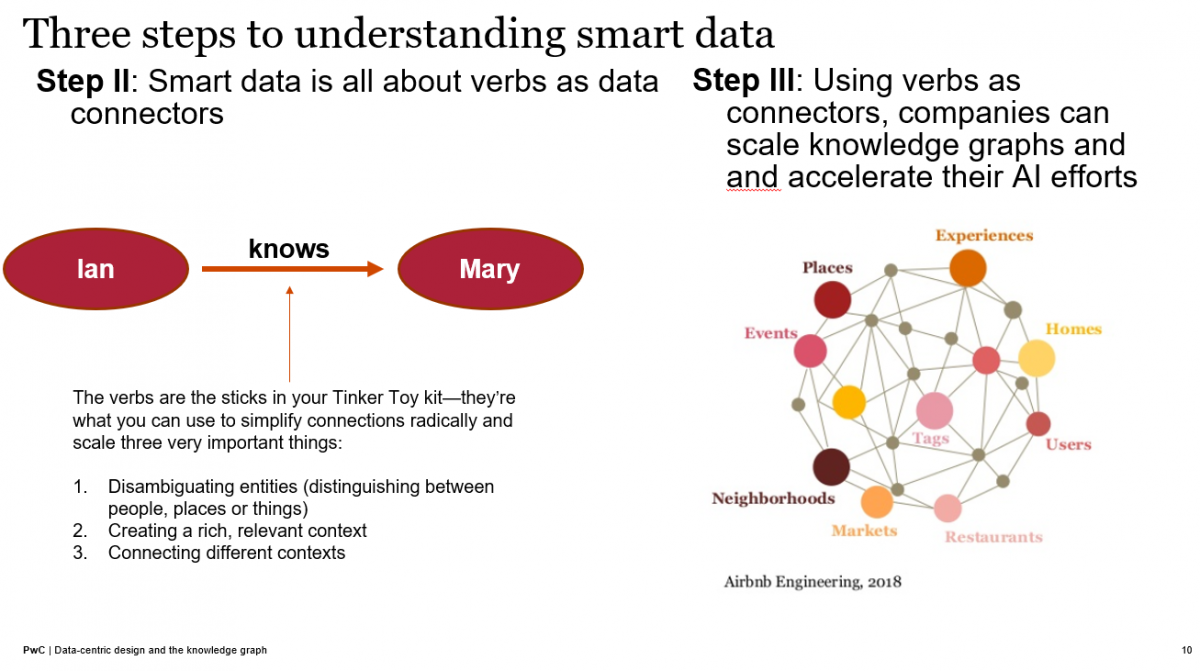 What most don't realize is that most of the data in the data tables that enterprises create and store buries or lacks representations of those essential relationships. Once you make those verbs into the data, machines can "see" and use the context, and even make new inferences on other important relationships that can be added to the mix.

Want to learn about past, present, and future of Semantic AI? Go for Alan's talk! Register for SEMANTiCS Austin!

Without context, we can't scale AI. But if we add that context with the help of humans in the loop who understand the relevant business domains, we can create a digital twin of a whole business, whole supply chain, or whole ecosystem by snapping together all these contexts (using standards-based approaches that allow the Tinker Toy connections) to create a fully interoperable picture. That's just one reason why there's so much excitement around knowledge graphs.

Danilo: What are the crucial milestones for such developments?

Alan: The science fiction writer William Gibson famously pointed out in the 1990s that "The future is already here — it's just not very evenly distributed."

To get beyond just pockets of development, I think enterprise leaders need to be made aware how much near-term value knowledge graphs can deliver as a means of graph-based data management to facilitate GDPR and CCPA compliance and reduce a data-risk footprint that's spiralling out of control. We should bluntly point out that traditional (tabular/relational) data management doesn't scale given today's rates of data growth and the heterogeneity of that data.

In general, we need to get data users and developers to think beyond tables. With graphs, we're not replacing tables—we're weaving together an integration fabric with the help of graphs. The graphs can help us manage any data type.

Somehow, we have to wake up the field of data management and light a fire under leadership to get them to realize that there are better, more efficient ways. 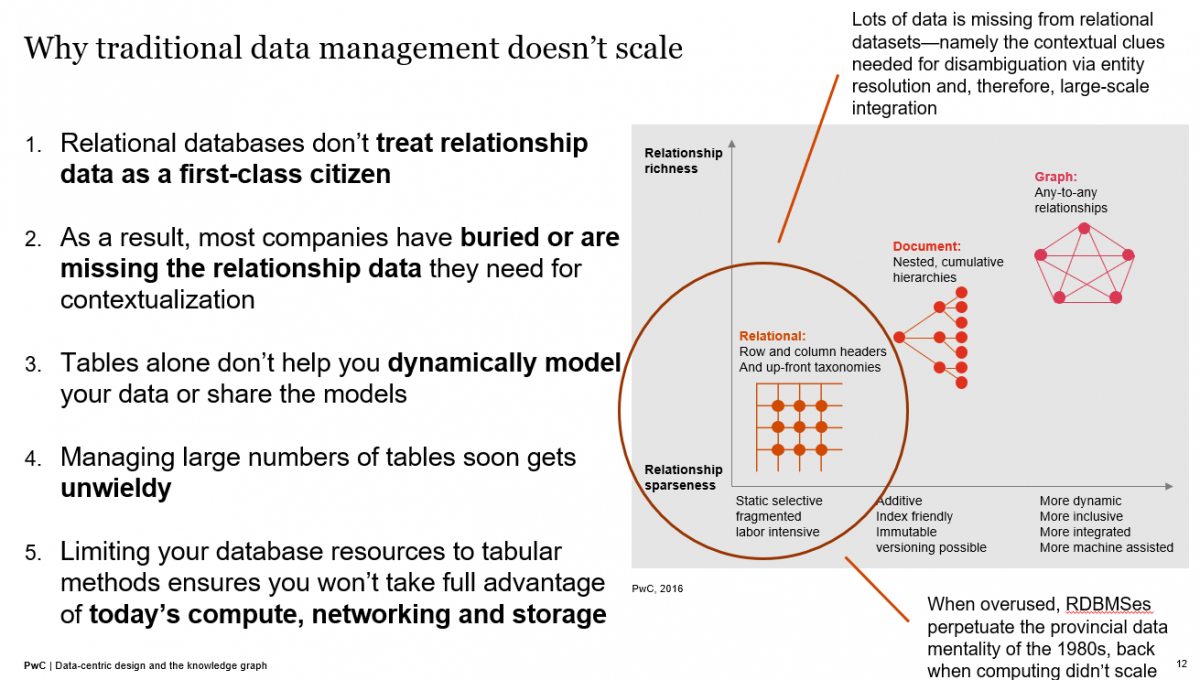 Danilo: What can people expect from your talk at SEMANTiCS?

Alan: I'll be talking about true business transformation using knowledge graphs. Many companies give lip service to "digital transformation" and are investing significant amounts to "transform" themselves. But unless they transform their data architectures and how they use and manage data and harness the description/predicate logic that contextualizes that data, they won't be able to scale their transformation efforts.

It's now 2020, and awareness of these simple facts is still quite low except among the top 20 or 30 internet companies in the world who saw the value of contextualized data early on and mobilized to take advantage of it.

Alan Morrison is a Senior Research Fellow, Emerging Tech for PricewaterhouseCoopers’ Advisory Services in the US. A 19-year veteran of PwC's technology and innovation think tanks in Silicon Valley, Alan identifies emerging technologies on the cusp of adoption, tracks and analyzes how they're being used by large enterprises, and assesses their near-term business impacts on behalf of PwC and its clients.

Conference Canceled due to COVID-19 Virus

Agile Means to Digital Transformation
Semantic Web in SQL - how that fit together
Pre-conference Webinar
The point where Semantic Technologies can be easily deployed and at reasonable costs
iNovex: Semantic Tech Experts teaming up to deliver innovative data solutions
Speakers, Companies, and Topics you don't want to miss
The future is already here — it's just not very evenly distributed
Jans Aasman - Correlations and Causation

Appetizer for SEMANTiCS Austin - the Webinar
Conference Kickoff Webinar: Knowledge Graphs, AI and Semantics: How do these technologies fit together?
Not Science Fiction - Kurt Cagle's View on Semantic Technologies
First Conference to Promote Next Generation of Transparent AI in the US

Beyond hype and pessimism: FAIR data and services
AI is Machine Learning ++
Try not to move the data.
Semantic APIs: Give Applications a Common Language

The Richness of Next-Generation Knowledge Graphs
Explainable AI is the key to progress and acceptance of AI
Will Deep Learning and Knowledge Graphs outperform Existing Systems?

This time, AI is here to stay

What to consider when you are licensing a Knowledge Organization System

Join the Vocabulary Carnival at SEMANTiCS 2018
Linking knowledge graphs and data governance along the data lifecycle
Linked Data has many “faces”
Information management unlocking the potential of AI
Service Science, Semantic Web and Big Data in Agriculture
How to define a „digital state“
Leverage your business capabilities with Open Data

This was SEMANTICS 2017
13 out of 370 Voices
Vote for the best Industry Contribution
A brief talk with keynote speakers Aaron Bradley and Eamonn Glass
Andreas Blumauer of gold sponsor Semantic Web Company: "Semantic technologies help organisations to substantially reduce its dependency on specialised IT professionals"

Ontotext is a proud sponsor of the conference with CEO Atanas Kiryakov impatient to meet you in Amsterdam
Kadaster can be characterised as an information organisation a lot of datasets and information are available at platforms and are connectable
Will semantics help disentangle the Gordian knot of Big Data in animal health
Mario Campolargo of ISA2 sees Semantics 2017 as an opportunity to go on expanding the map of semantic interoperability
DBpedia, an open project with an inclusive model.
Keynote speaker Nathalie Aussenac-Gilles about knowledge extraction and ontology engineering
MarkLogic: multi-model NoSQL database
Ordina - one of the first major IT companies in the Netherlands with focus on Linked Data

This was SEMANTICS 2016
European Linked Data Award given to Projects in Education and Legal Sector
Enriched Industry - Special Sessions
Where will we stay with semantic technologies in 10 years time?
Get to know our Gold Sponsor Ontotext with its current project Pheme

How to turn your company’s content into information - Gold Sponsor Mekon Ltd.
Taking data quality assurance as an opportunity and not only duty
Attend and contribute to the SEMANTiCS 2016 @ University of Leipzig
How to discover hidden semantics in multimedia content - Gold Sponsor MICO Project
How do semantic technologies enable the Internet of Things?

How to enrich media with semantic data models - 3+1 Feature w/ Keynote Speaker Michele Pasin (Springer Nature)
How to move business intelligence to the future – Gold Sponsor Semalytix GmbH
Where is the Semantic Web leading us to? A quick overview.

How to integrate your silos and command your Data! - Gold Sponsor eccenca GmbH
3+1 Feature: How Semantic Technology Will Change Our Present Perspective of the Past - Keynote Speaker Marie Wallace (IBM)
How Natural Language Processing will change the Semantic Web
From Taxonomies over Ontologies to Knowledge Graphs
Get to know our Gold Sponsor LEDS - Linked Enterprise Data Services

Join us for days packed with insights and contacts

12th edition of the SEMANTiCS in Leipzig

This was SEMANTICS 2015
ELDC Award: Europe's Crème de la Crème of Linked Data and Semantic Web - 1st European Linked Data Award given
3 plus 1 Feature: Christian Dirschl
Vienna supports businesses
Getting to grips with semantics in enterprise search
MarkLogic and the power of triple stores
How EBCONT uses semantics to improve business workflows
Do not miss!! Utilizing linked geospatial data for your enterprise